The Goal here should not be talking technique but biomechanical principles do influence how much power you can generate. You want to use as much muscle mass as possible and in the correct sequence from the ground up into the bat.

It might sound boring but we need to talk some biomechanical principles: 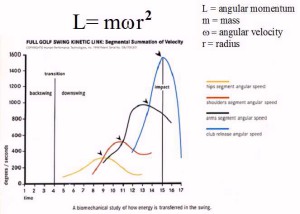 It is important that you don’t activate the next link before the prior link. The swing does not start by taking the knob to the ball but by driving the legs and hips. First the hands stay back and closely connected to the body until the hips and trunk have started to open, then the hands turn the barrell into the ball last and then follow through. 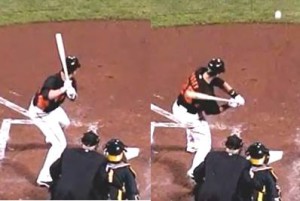 2.The stretch shortening cycle: In good swings you can actually see that the hips and hands move in different directions for a moment to create maximum stretch. As the hips transition from the coil to the opening oft he lower body the hands are still moving back for a little moment. That creates great stretch. The hands and hips don’t go at the same time. Studies have shown that a muscle that is stretched rapidly and then immediately fires generates more power than a static muscle. For that reason a tennisplayer will do a takeback and then swing without a pause rather than just waiting with the bat back. For that reason baseball players „Load“ before they swing. The Load will be a slight counter rotation oft he hips and a slight back/up move oft he hands. To have it work best the load must be on time. Too late and you are rushed and too early and you don’t use the stretch shortening cycle perfectly.

In good swings you can actually see that the hips and hands move in different directions for a moment to create maximum stretch. As the hips transition from the coil to the opening oft he lower body the hands are still moving back for a little moment. That creates great stretch. The hands and hips don’t go at the same time.

When you push against the earth, due to newtons law the earth pushes back with the same force. A Jumper pushes against the ground and the ground catapults him into the air. In baseball thus is it important to be strongly grounded as you swing.

As you load the rear leg is stable. You gather the weight against the rear leg and then coil the hips back as you stride. The rear leg is rock solid and not swaying back but resisting that coil so that you coil around/against the rear side rather than shift the weight over it. That loads the rear leg like a spring so that the rear leg then drives sideways against the ground to start to open the lower body. As the lower body starts to open the front foot is planted. First only the toe and then the heel plants which triggerst he hips to further open and then block the front side so that this side decelerates and the rear side accelerates more. That means that the ground is used on both legs to accelerate the swing.

Now that we have talked the principles we can talk about the swing in general.

Here is a swing of Adrian Gonzalez with some interesting positions. 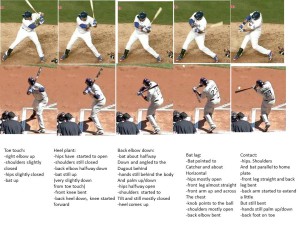 The swing starts with coiling the hips as you start the stride. Some players will gather their weight back before that or lift their leg and others start straight forward. As you coil try not to counter rotate the shoulders and hands too much to not lose vision to the ball. Basically you try to keep the chest facing the plate as you coil the hips although the shoulders will usually counter rotate a little. But it is important that this is driven by the hips. That also delays the hands a little so that the hands actually come back during the end oft he coil and continue carrying back after the coil oft he hips is reversed and they violently open. This creates the desired stretch shortening cycle.

As you coil you are striding forward. The rear leg is loaded and driving inward against the coiling hips. The hips start to open at toe touch. Just after toe touch the heel will plant. That fixates the front side and creates a stable axis fort he body to rotate around. The lead leg extends and the rear knee is driving in, not squishing the bug but driving sideways of the instep as long as possible and the coming up on the toe. 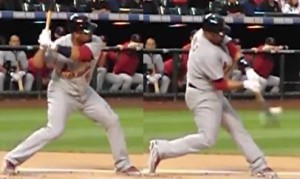 The back elbow was up at toe touch and the bat pointing to the sky. As the hips are opening the hands are still going back. The shoulders are not opening immediately but tilting backwards a little (start with front shoulder lower than back shoulder at toe touch and then reverse) before they start to open which increases the stretch.The back elbow is lowering and the bat is going down and behind so that it is actually going away from the plate. 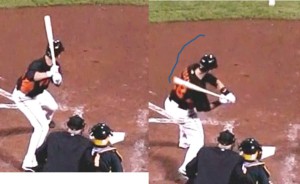 The hands now finally start to be pulled forward by the trunk rotation (although they are still trying to stay back and connected to the rear side) but the bat is still going rearward, basically continuing to load the hands and forearms. The bat also lowers into the swing plane (talk about that later). The body is turned forward and just the bat is lagging.

The body is now mostly in the contact position, only the bat is lagging back. That creates a big stretch in the hands and forearms and now all the hitter needs to do is turning that bathead into the ball. The shoulders will finish their turn but basically the swing is on an autopilot now.

At contact the arms are still bent. The front arm is stretched across the chest and the rear elbow bent and tucked in into the side. 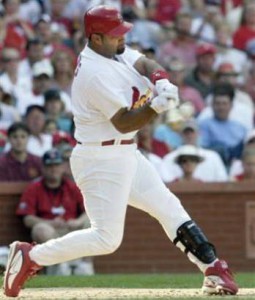 Now the arms will extend and at the very end the hands roll over. Basically extension happens because the bathead pullst he arm into extension. Since the hip rotation now delerates the hands that previously travelled in an arc around the body now go forward straighter the the pitcher but you are not trying to push the hands in a straight line. Just whip the bathead with your whole body and extension will happen.

Not only batspeed is important for power but also making clean and hard contact. You give yourself the best chance to do that by matching the plane oft he pitch. A pitch will go down on a 5-10 degree angle on average and to give yourself the best chance to succeed you want to swing UP 5-10 degrees at contact. The swing will start down behind the body, but then level out and go up about two feet behind contact or so. basically the path resembles that Nike „swoosh“ sign.

Here is a great illustration that I found on youtube (source: https://www.youtube.com/watch?v=Ehs-H2V6N5o) showing the plane of world class player Shin Soo-Choo. 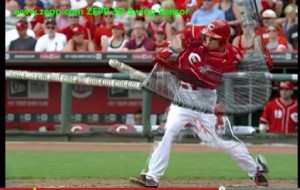 It is also important to not that the swing path is basically an arc around the spine. The swing is mostly perpendicular tot he spine which means that the spine is tilted over the plate as you swing so that you don’t drop the hands to hit lower balls. The spine also usually leans a little rearward at contact.

The lead arm and bat ideally form a straight line at contact that is perpendicular to the spine. The lead arm is stretched across the chest and elbow tucked into the side ideally. It does not always work like this and sometimes you need to leave that plane a little or extend the armst o adjust but that ist he ideal you should strive for. 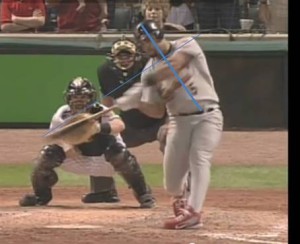 Also keep in mind that your swing not only  needs to be fast but also be quick. Pros have times from initiation to contact of less than 0.15 seconds. Keep the barrel and hands close to the body initially for a shorter and more direct swing.

A good device to check batspeed, swing times and other features like the attack angle of the bat is The Zepp device.

I can recommend Zepp from my experience but there are other companies who offer similar devices too.